General Meeting and Special Election on Sunday 6 February at 1pm

Fixin’ San Mateo County Organization was established with the belief that “the conduct and administration of our law enforcement should reflect the shared values of our community. Transparency and accountability benefit both citizens and the Sheriff’s Office and reduce the risk of costly liability to the county and its taxpayers by identifying and addressing issues and preventing problems”.

The Coastside Democrats will also be conducting a Special Election for Board Secretary and Member-at-Large.

Club members in good standing may submit their names before the meeting and ask any questions by emailing to president@coastsidedemocrats.com. Candidates may announce from the floor to run for either of these offices. Candidates will be given two minutes to speak.

Only Coastside Democratic Club members in good standing may vote.

Senator Josh Becker will speak with Coastside Democrats on “The UN Climate Change Conference (COP26)” and “California Zero: Getting an American State to Net Zero”.

To attend, please register with us here.

SENATOR BECKER SPOKE AT COP26 ABOUT “CALIFORNIA ZERO: GETTING AN AMERICAN STATE TO NET ZERO”

In a press conference at the UN Climate Conference, Senator Josh Becker reviewed the past, present, and future of California climate policy and announced two major initiatives for the upcoming legislative session.

After reviewing California’s leadership, he concluded that he’s proud that “since 2000, California has reduced its emissions per capita by more than 20% while at the same time growing our economy by more than 60%.”

But he also noted that getting to our 2030 goal, and getting to carbon neutrality no later than 2045, will require California to move a lot faster.

As part of that effort, he announced legislation to require the California state government to achieve net zero emissions of GHGs from the state’s own operations by 2035–10 years ahead of the state’s current economy-wide net zero goal.

In 2018, Governor Brown issued executive order B-55-18 to set a target for the whole economy of California to achieve net zero no later than 2045. This will require every citizen and every company in the state to make changes to decarbonize the vehicles they drive, the energy they use in their homes and other buildings, and the energy used in manufacturing and other industrial processes.

“If we are going to ask the entire state to achieve net zero, shouldn’t the government lead by example and show how to get to zero before asking everyone else to do it?” asked Senator Becker, D-Peninsula, who chairs the Senate Subcommittee on the Clean Energy Future and is vice chair of the Legislature’s Committee on Climate Change Policies.

“I propose that the state government should set a target of achieving net zero emissions from its own operations by 2035.”

“The state could–and should–lead on these issues by developing clear plans for how the state government will get to net zero emissions within its own operations by being an early adopter of the necessary technologies that will ultimately be needed by the rest of the state.”

While many state agencies have taken steps to reduce GHG emissions, more needs to be done. Today, for example, the state’s fleet of about 56,000 vehicles includes only about 2% zero-emission vehicles according to last published data.
“Requiring the state government to achieve net zero by 2035 will leverage the state’s procurement power to kickstart progress across many sectors.”
Following up on his successful effort to pass a bill to get to net zero emissions from the cement industry, Senator Becker introduced SB 778 last session to require the state to buy low carbon concrete. This bill is eligible for further action next year. Together, cement and concrete account for 7% of the world’s carbon emissions.

Senator Becker also announced he was exploring legislation to “Build Clean Faster,” saying “this is a climate crisis. We cannot let business as usual, with all that red tape, prevent us from doing what must be done. It’s time that we stop paying lawyers to fight about these projects and start paying workers to get them built.”

He said he intends to work with others in the legislature, state agencies, the NGO community, and the private sector to find a way to break this logjam and get these environmentally necessary projects moving at the pace we need to see.

The announced legislation is eligible to be introduced in January when the Legislature reconvenes.

You can watch a recording of the press conference here. Senator Becker is available for comment.

Recall Election; Deadline to Register to Vote is 30 August!

Are You Registered to Vote?

Californians will decide whether to recall Governor Gavin Newsom or keep him in office. This will be an all mail in ballot election.

Deadline to Register to Vote in the Recall Election is August 30, 2021 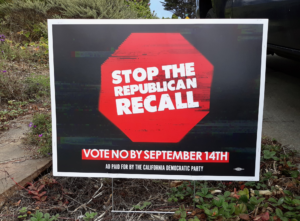 For more information and to register online visit http://registertovote.ca.gov or register right now on your phone with this code.