A FUNDRAISER FOR JOHN HICKENLOOPER

Candidate Debates are about to start!

California Is Now an ‘Early Primary State.’ Democrats Are Grappling With How to Compete.

OAKLAND, Calif. — Senator Elizabeth Warren bounded onto stage before a crowd of more than 6,000 here — “the biggest one so far,” she announced excitedly — and stayed for nearly two extra hours, past 11 p.m., until everyone who wanted a picture with her had gotten one.

At the same time on Friday night, across the bay in San Francisco, Beto O’Rourke and Senator Amy Klobuchar were pressing their cases and posing for selfies at a crowded meeting of the Latino caucus of the California Democratic Party. Not far away, Jane Sanders, the wife of Senator Bernie Sanders, made a surprise stop at a Chinese food dinner of self-described “Berniecrats.”

The next morning, Mr. Sanders and Senator Kamala Harris bumped into each other backstage at a labor breakfast, as more than a dozen candidates crisscrossed San Francisco’s streets for dueling speeches at the state party convention and another nearby progressive gathering.

For years, California has been an afterthought in presidential primaries, because it usually votes long after candidates have sewn up their parties’ nominations with wins in other states. While California was among the final states to vote last time, in June 2016, state officials have now moved up the primary date by three months. In March 2020, its treasure trove of nearly 500 Democratic delegates is poised to play a decisive role at the start of the nominating contests.

“We are,” Gov. Gavin Newsom of California proudly declared, “an early voting state.”

[Sign up for our politics newsletter and join the conversation around the 2020 presidential race.]

Millions of California Democrats will be eligible to start casting ballots by mail on Feb. 3 — the same day as Iowans head to their leadoff caucuses. Yet California’s true impact on the nomination may depend heavily on the results in Iowa, and on whether a runaway nominee emerges in the following three contests of New Hampshire (on Feb. 11), Nevada (Feb. 22) and South Carolina (Feb. 29).

If one candidate dominates those four states, California — which votes on March 3 with a dozen other “Super Tuesday” states — could catapult him or her even further ahead with a big delegate victory. By contrast, political strategists say, candidates who suffer in those first states and lose momentum would have a hard time turning things around in California, no matter how much time or money they invest in the state.

Ms. Warren, who used the California convention to send a message of her re-emergence, stuffed the hall with sign-wavers on Saturday.CreditSarahbeth Maney for The New York Times 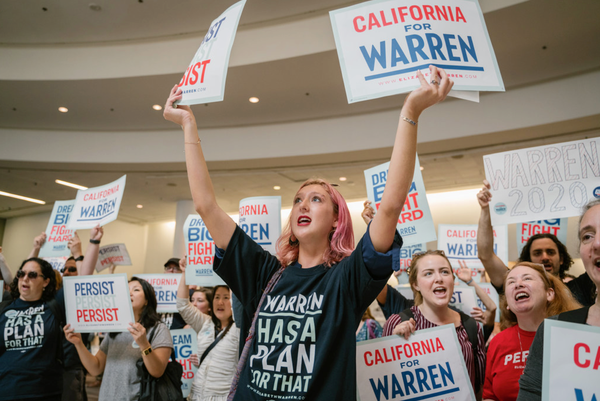 That is the California conundrum: It could prove to be the linchpin for almost any Democratic path to the 2020 nomination, and yet campaign officials believe there is exasperatingly little they can do to gain an edge in a state that is so vast and expensive for campaigning.

But they are not taking any chances.

All of the 2020 campaigns are grappling with the logistical and financial challenges of breaking through in a mammoth state of nearly 40 million residents whose delegates will be awarded based on both the statewide vote as well as the results in all 53 congressional districts.

With its multitude of pricey media markets, led by Los Angeles and the Bay Area, California is a prohibitively expensive place to buy television or digital ads at scale, making attention and coverage from the news media and on social media essential.

“The problem with California is that you could spend, like, hundreds of millions of dollars and it will feel like you spent five pennies,” Mr. Shakir said. “You can’t go up on air for the amount of time or as long as you would want. You can’t spend the money on field staff to cover that state with the resources that would be required. It is simply impossible.”

That heavily favors the three candidates who are already widely known: former Vice President Joseph R. Biden Jr., who was conspicuously absent from the state over the weekend; Mr. Sanders, who won 46 percent of the vote in California’s primary in 2016 against Hillary Clinton; and Ms. Harris, who served as district attorney of San Francisco and then California’s attorney general before being elected to the Senate in 2016.

[Keep up with the 2020 field with our candidate tracker.]

In his speech Sunday, Mr. Sanders took a not-so-veiled shot at Mr. Biden for skipping the convention. “There is a debate among presidential candidates who have spoken to you here in this room, and those who have chosen — for whatever reason — not to be in this room,” he said, before contrasting his left-wing vision with that of more moderate Democrats like the former vice president.

Over the weekend, much of the conversation among local activists and officials revolved around Ms. Harris’s difficulties living up to the hype and heightened expectations following her 20,000-strong campaign kickoff in Oakland just a few months ago. That discussion grew more intense after Ms. Warren drew thousands to her Oakland rally on Friday and then enjoyed an audience response at the convention the next day that was equal to that of California’s native daughter.

Speaking with reporters backstage, Mr. Newsom, a Harris supporter who co-hosted a fund-raiser for her on Friday at the home of the billionaires Ann and Gordon Getty, gamely sought to lower expectations.

“Kamala Harris is punching way above her weight,” Mr. Newsom said. “Think about this: She was a statewide elected official a couple of years ago. She’s running against some of the most well-known brands in the Democratic Party.”

And without mentioning names, the governor sought to frame her top-tier standing in the best possible light: “There’s five folks that have a real shot, Kamala Harris has a real shot. The fact that we’re even talking about that is an extraordinary accomplishment.”

Former Senator Barbara Boxer, who is close to Mr. Biden but has not endorsed anybody, said Ms. Harris was “going to have to really fight for it” in California because its vast and impersonal political nature does not necessarily confer a major home field advantage on someone who was only elected to the United States Senate in 2016.

“She could do really well and people will say, ‘Well, jeez, she couldn’t win her own state,’” Ms. Boxer said.

Senator Bernie Sanders with supporters at the California Democratic Party convention on Saturday. He won about 46 percent of the vote in the 2016 California presidential primary against Hillary Clinton.CreditSarahbeth Maney for The New York Times 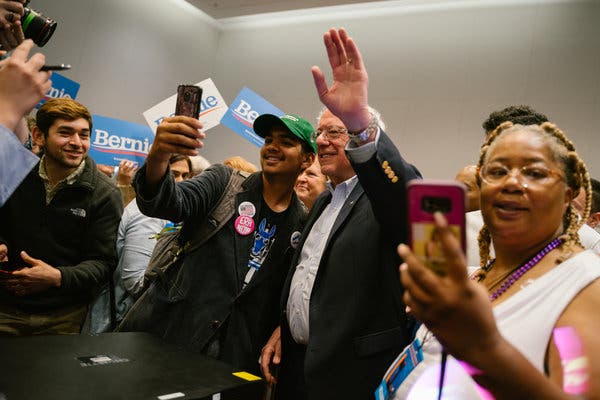 Paul Mitchell, who runs a bipartisan political data company based in California, said the outcome would be decided even earlier than the March 3 calendar date would suggest because of the state’s early-voting rules. He projected that 5 percent of California primary votes would be cast before the New Hampshire primary, 25 percent before Nevada and a whopping 45 percent before South Carolina.

“The idea that you’re going to sail into California on a win that is late in those first four, it’s kind of fiction because such a huge portion of California will already have cast ballots,” Mr. Mitchell said. “They need to treat it as sometime between New Hampshire and Nevada.”

That could spell trouble for Ms. Harris, whose campaign has signaled a focus on South Carolina, the first state on the primary schedule with a heavily African-American population.

Ms. Harris is working to build a home-state advantage, holding events in her native Bay area as well as in Los Angeles while also counting on a battalion of supportive local Democratic officials to act as her surrogates while she spends much of her time in the first early states. She rolled out a number of new California endorsements ahead of the convention, including more than half of the Democrats in the State Assembly, and in her speech she torched President Trump over what she called his “pathological failure of leadership.” The California-based strategists running Ms. Harris’s national campaign have deep experience in the state, having overseen her past races as well as those of Mr. Newsom and a number of other Democratic lawmakers.

But she faces a challenge from candidates like Ms. Warren, who used the California convention to send a message of her own re-emergence, by holding the Friday rally in Oakland; buying a billboard in San Francisco calling to “break up big tech”; stuffing the convention hall with sign-wavers on Saturday; and lacing her stump speech with new lines that appeared aimed at Mr. Biden’s talk of working with Republicans.

“Some Democrats in Washington believe the only changes we can get are tweaks and nudges. If they dream at all, they dream small. Some say if we all just calm down, the Republicans will come to their senses,” Ms. Warren said. “The time for small ideas is over.”

The activists who gathered in Oakland, a famously liberal city, represented the leftward boundaries of the Democratic Party — at moments to the point of caricature. Anti-circumcision protesters standing outside the convention hall were joined by parading sex workers, some wearing fishnet stockings. And an animal rights activist sought to draw attention to his cause by storming the stage at a nearby MoveOn.org forum and snatching the microphone from Ms. Harris. 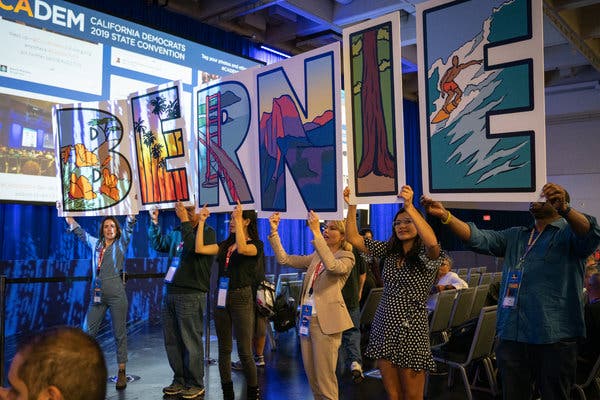 Former Gov. John Hickenlooper of Colorado, a moderate Democratic candidate, sought to distinguish himself by earning the ire of attendees. He was booed heavily when he declared, “Socialism is not the answer.” Mr. Trump has threatened to caricature all Democrats with the socialist label, though only Mr. Sanders is a self-described democratic socialist.

But even as he was swarmed for pictures and handshakes through the weekend, it was unclear to what extent his political celebrity appeal would translate into votes. Like other attendees, many of those who greeted him said they were undecided.

That is where Mayor Pete Buttigieg of South Bend, Ind., is headed on Monday, traveling to Fresno for a meet-and-greet with voters and to record a town hall on MSNBC.

In his speech to the convention, Mr. Buttigieg took implicit aim at the electability case that Mr. Biden has made for his candidacy, outlining how Mr. Trump could win re-election.

The question for the Democratic contenders is what playing it safe means when it comes to competing in a state this big so early in the primary.

Chris Lehane, a California-based Democratic strategist now working in the tech sector, said that momentum and media attention from early victories would power any success in the Super Tuesday states.

A version of this article appears in print on June 2, 2019, on Page A1 of the New York edition with the headline: In California, Democrats Try For Early Prize. Order Reprints | Today’s Paper | Subscribe