Member, Board of Supervisors, 3rd District: Ray Mueller won with 63.95%

Hello Club Members and Friends: I’ve just been notified of an ordinance being considered by the Board of Supervisors to increase the minimum wage in the unincorporated area to $16.50 an hour starting in January, 2023. This rate is consistent with the rate that cities containing 70% of the county’s population have already passed. The ordinance is sponsored by Supervisors Horsley and Pine and they will be hearing it at their meeting this Tuesday, November 15. The agenda item number is 11.
Please take a couple minutes and email them a letter of support. Our essential workers, farm workers and those working in the hospitality and tourism industries are the backbone of the Coastside and they are finding it increasingly difficult to stay in our community because of our high cost of living. This ordinance will help.
Click here for a sample letter that contains all the details. Please copy this letter or draft your own version, paste it into an email, add your name and City/Town at the bottom and send it to:
boardfeedback@smcgov.org   Put   11.15.22 MTG Item 11 in the subject line.
Here is the link for the agenda but the complete ordinance text is not presented there. Instructions for attending the meeting in person or via zoom are included.  https://sanmateocounty.legistar.com/View.ashx?M=A&ID=896525&GUID=D4DD2F13-883D-48D6-AD2B-0E0506BC3D91
Thanks so much and I hope you will take advantage of this opportunity to help make positive change in our community.

Returned your Ballot yet?

If it’s still on your desk or kitchen table, it’s time to fill it out and return it!  Ballots must be postmarked by Tuesday, November 8th to be counted.  Click here to find a local Drop Box or Vote Center.

Just make sure you vote!!! We must all make the future of our democracy our personal priority. 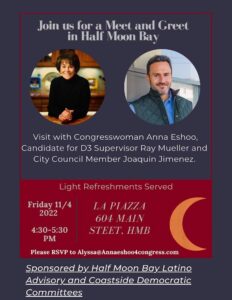 With Election Day less than a week away, join the Coastside community as we welcome two of our club’s endorsed candidates on Friday, November 4 from 4:30-5:30 pm at La Piazza, 604 Main St. in downtown Half Moon Bay.

Half Moon Bay City Council member Joaquin Jiminez will host this event featuring Congressmember Anna Eshoo, running to represent us in the new Congressional District 16, and Ray Mueller, candidate for the San Mateo County Board of Supervisors representing District 3. Meet the candidates and let them know about your priorities and concerns for the Coastside, the county, the state and our nation. Light refreshments will be served. Please RSVP to Alyssa@annaeshoo4congress.com